Who is Gaston Kaboré? Let’s Find Out JEAN-MARIE GASTON (Bobo Dioulasso, Burkina Faso, 1951). Gaston Kabore is one of a group of filmmakers who emerged from the small country of Burkina Faso with feature films in the late seventies and early eighties. He is one of the rare filmmakers to go on to make more than one film. Kabore comes from a large Catholic family and from his country’s largest ethnic group, the Mossi, whose past he presents in his first feature-length film. He received his primary and secondary education in Burkina Faso. He then began studies in history at the Centre d’Etudes Superieures d’Histoire d’Ouagadougou, which he finished in Paris with an MA. He developed and pursued an interest in film studies at the Ecole Supe rieure d’Etudes Cinematographiques.

Once he returned to Africa, he became involved in film as a teacher and administrator. He became director of the Centre National du Cinema and taught at the Institut Africain d’Education Cinematographique. His first films were documentaries. His features gained him an international reputation as a filmmaker, and he became the general secretary of FEPACI (Federation panafricaine des cineastes). In this capacity he promoted the organization’s goals of working with other African filmmakers to improve the conditions for cinema on the continent. 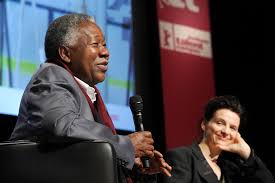 His first film, for which he shares the credit, Je reviens de Bokin/ I Come From Bokin (1977), was made by students of INAFEC (Institut africain d’education cinematographique) collective under his direction. The story suggests topics that will be of concern to him in later films such as the relationship between the country and the city. A young tailor, who lives in the country, decides to go to the capital for more opportunities. After a series of adventures, he ends up in jail for a crime he didn’t commit. The documentaries he made next are concerned with practical problems related to the land or, as in the case of Regard sur le VIeme FESPACO/ A Look at the 6th FESPACO (1979), connected with his work promoting African film. None of these early works give a real indication of the quality of his first feature film, Wend Kuuni/ God’s Gift* (1982). This film has become an example of the kind of film that represents the best of African cinema.

It is set in the past before colonialism, at the height of the strength of the Mossi Empire and filmed in Moré, the dominant language of Burkina Faso. Wend Kuuni is the name of a young boy who is found in the bush. He is adopted by a family that has a daughter but no son. The young boy is mute and cannot explain his past. He settles in with his adopted family and becomes good friends with his new sister. He experiences a traumatic event when he discovers a dead body and recovers his voice. He is able to explain how his father, a hunter, disappeared. His mother was expelled from her village when she refused to remarry and died in the bush. While on the surface the film seems to tell a simple story, it is really a complex narrative that interacts with the oral story-telling form and both presents and criticizes tradition. The film actually opens with shots of the mother, whose story frames the main narrative, adding complexity to the film’s structure. The film also demonstrates the failure of tradition to give rights to women and the destruction of lives that occurs when women are repressed. In addition to the mother’s death, Wend Kuuni’s sister has her choices limited by her gender. She is confined to the home area while he works freely in the fields. The use of space to present themes carries over into his next feature. In-between his first and second feature, Kabore made a short film about the problems of African cinema, Propos sur le cinema/ Reflections on the Cinema (1986). He has two important filmmakers— Med Hondo and Souleymane Oumar Cisse discuss the difficulties of making films on this continent that include such topics as promotion, production, and finances. In his next feature film, Zan Boko/ Homeland (1988), Kabore  turns to modern Africa to deal with the problems of modernization in postcolonial society. In Zan Boko the lives of villagers are disrupted as is their connection to the land when the encroaching city swallows up their homeland.

The disparity between the needs of the poor and the desires of the rich is underlined when wealthy neighbors want land for a swimming pool without thinking about its importance to the people who live on it. Kabore  explores the role of the media when the villager is invited to share his point of view on a television show. Corrupt officials shut down the show when they realize its topic. By focusing on the land and its meaning, Kabore  takes a creative approach to the topic of the role of the bourgeoisie in modern Africa. While there are a few people with integrity, the majority of the members of the middle class and government officials are not really any different in their tactics from the colonialists they replaced. While Kabore ´’s films explore the current situation in Africa— either by retrieving the past or examining the present— he is also concerned with the more specific question of the position of film on the continent.

He recognizes the importance of Africans having their own images on the screen. His work with FEPACI is his means of attempting to ensure the existence of such representation as he states in an essay he wrote for a FEPACI collection (‘‘L’image de soi, un besoin vital’’ 21– 22). In the same collection he talks about how cinema is central to his view of reality. He feels his film work allows him to share his view of truth with others and share his view of the world with them . Kabore contributes to African cinema— both in his role as a filmmaker and in his work promoting the work of others.

Tags: store and conserve the grain