What You should know About Colonial Period Cinema A brief history lesson extracted just for you from Africana: The Encyclopedia of the African and African American Experience. Check it out and share your 2 cents!

According to popular legend, cinema was first introduced to Africa in 1896, after a stolen bioscope mysteriously made its way to Cape Town, South Africa. For the next several decades, colonial governments effectively delayed the development of an African film industry, but since independence, African  film directors have struggled to create a viable cinema of their own. Despite ongoing production and distribution problems, they have largely succeeded; African cinema is now internationally recognized, and African filmmakers now aspire to reach broader audiences in Africa itself.

Although Europeans and Americans started making films in Africa soon after the medium was invented in the 1890s, Africa’s colonial regimes restricted African’s exposure to film and film production until the late 1950s. In British colonies  as well as the Belgian Congo (present-day Democratic Republic Of The Congo), for example, Africans were forbidden to watch European movies. French and Belgian colonial governments controlled the content of all of the films produced within their borders, and Africans were frequently forbidden to work on film productions. These restrictions reflected the colonial powers’ concern about the influence of the cinematic medium on the African population. They assumed that Africans were incapable of distinguishing fact from fiction and would therefore take too seriously films that depict Europeans and Americans unfavorably.They also feared the possible dissemination of subversive or anti colonial messages through film. Despite these restrictions, some Africans still managed to learn about film and film making. Primarily, they took advantage of colonial efforts to use film as an educational tool. In Tanganyika (present-day Tanzania), for example, the Bantu Educational Cinema Experiment (BECE) was devoted to producing films on hygiene, improved farming methods, and African folktales. Launched in 1935 and sponsored by the colonial office of the British Film Institute, the BECE’s films were made in a variety of East African languages and shown to African audiences. The BECE periodically employed Africans to perform menial tasks, and its supervisor L.A. Notcutt urged that similar cinema projects, also employing Africans, be established throughout British Africa. The subsequent establishments of colonial film units throughout  the British colonies provided Africans with one way to acquire film making skills. In the Belgian Congo a similar opportunity emerged for Africans interrested in film. In the 1940s the colonial government’s Film and Photo Bureau made educational and propaganda films specifically for the African population.In order to reduce costs, the bureau employed African workers who were taught the basics of film production. In addition, African could acquire cinematic skills at the Congolese Center for Catholic Action Cinema (CCCAC) in Leopoldville (present day Kinshasa) or Africa Films in Kivu,both of which were run by catholic priests. The two companies’ films, such as  CCCAC’s series Les Palabres de Mboloko, starring an  animated antelope aimed to teach African audiences religious virtues. Both companies offered Africans an opportunity to learn cinematic techniques, but, as in the other colonial experiments, the content and format of the films produced by these groups were severely restricted by the colonial administration. In  the French colonies, France’s goal of assimilating colonial subjects into French culture provided some aspiring African film directors opportunities to attend film school abroad. One of the first was the Senegalese Paulin Vieyra, who graduated from L’Institut des Hautes Etudes Cinematographiques in Paris in 1955. Vieyra later became a well known film critic and historian. But he and other Francophone African filmmakers were not permitted to return to Africa to make films. France’s 1934 Laval Decree placed strict controls on any filmmaking in its colonies and denied African directors filming permits altogether. 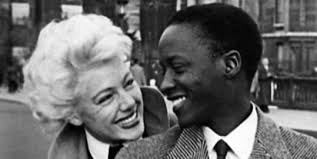 By the late 1950s a number of Africans had acquired  filmmaking skills, but they still had little autonomy. Instead, African directors were forced to comply with the paternalistic restrictions established by the colonies’ production centers, which typically allowed them to make only “educational” films. Not until decolonization could African film directors begin building a film industry of their own.

Source: Africana: The Encyclopedia of the African and African American Experience