The Battle of Algiers – Set in Africa

The Battle of Algiers (Italian: La battaglia di Algeri) is a 1966 war film co-written and directed by Gillo Pontecorvo. It is based on events undertaken by rebels during the Algerian War (1954–1962) against the French government in North Africa, the most prominent being the eponymous Battle of Algiers, the capital of Algeria. It was shot on location in a Roberto Rossellini-inspired newsreel style: in black and white with documentary-type editing to add to its sense of historical authenticity, with mostly non-professional actors who had lived through the real battle. The film’s score was composed by Pontecorvo and Ennio Morricone. It is often associated with Italian neorealist cinema. 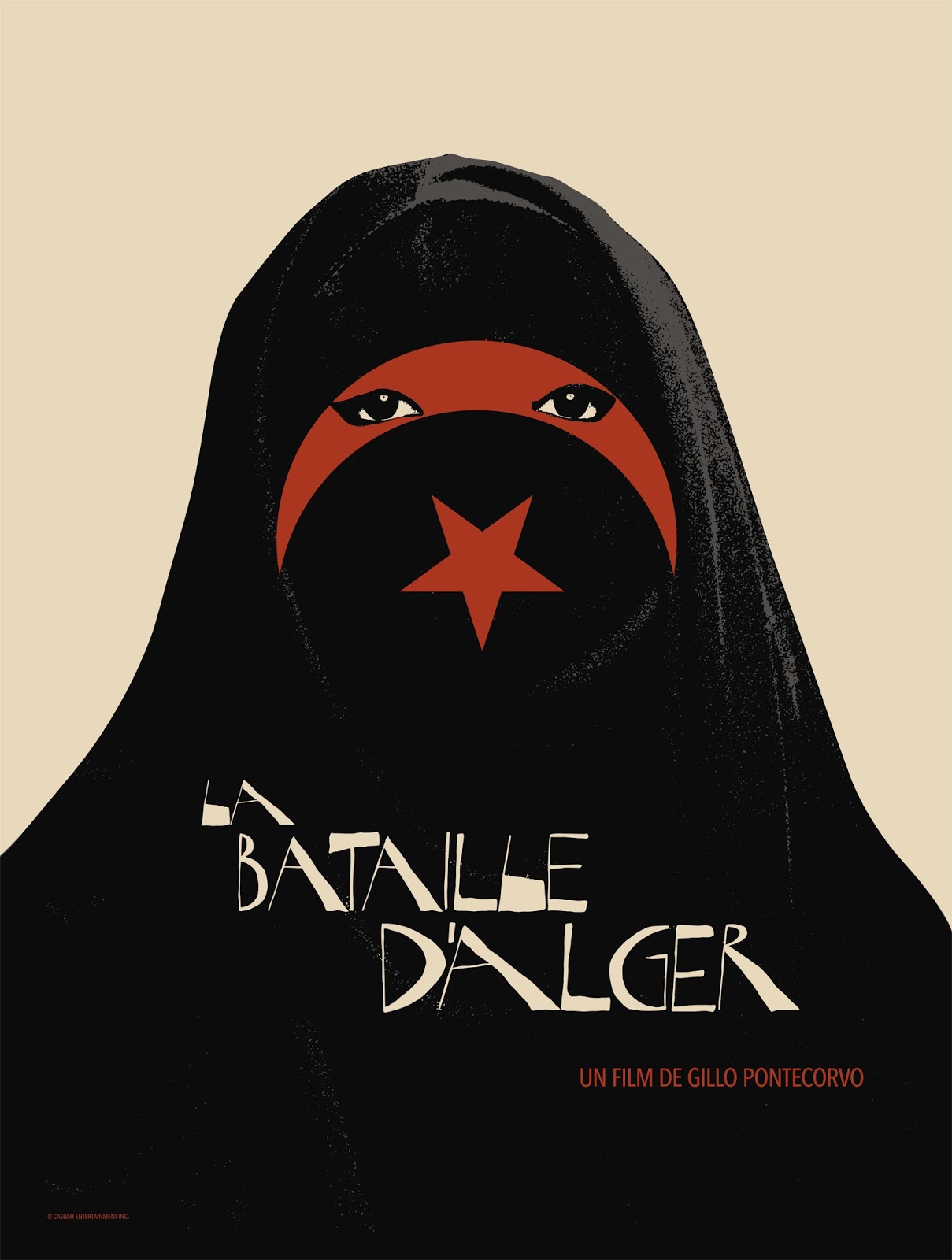 The film concentrates mainly on revolutionary fighter Ali La Pointe during the years between 1954 and 1957, when guerrilla fighters of the FLN went into Algiers. Their actions were met by French paratroopers attempting to regain territory. The highly dramatic film is about the organization of a guerrilla movement and the illegal methods, such as torture, used by the French to stop it. Algeria succeeded in gaining independence from the French, which Pontecorvo addresses in the film’s epilogue. The film has been critically acclaimed. Both insurgent groups and state authorities have considered it to be an important commentary on urban guerrilla warfare. It occupies the 48th place on the Critics’ Top 250 Films of the 2012 Sight & Sound poll, as well as 120th place on Empire magazine’s list of the “500 greatest movies of all time”. It was selected to enter the list of the “100 Italian films to be saved”. A subject of sociopolitical controversy, the film was not screened for five years in France; it was eventually released in 1971.

The Battle of Algiers reconstructs the events that occurred in the capital city of French Algeria between November 1954 and December 1957, during the Algerian War of Independence. The narrative begins with the organization of revolutionary cells in the Casbah. Because of partisan warfare between the Algerian locals and Pied-Noir, in which both sides commit acts of increasing violence, France sends French Army paratroopers to the city to fight against and capture members of the National Liberation Front (FLN). The paratroopers are depicted as neutralizing the whole of the FLN leadership through either assassination or capture. The film ends with a coda depicting nationalist demonstrations and riots, suggesting that although France won the Battle of Algiers, it lost the Algerian War. 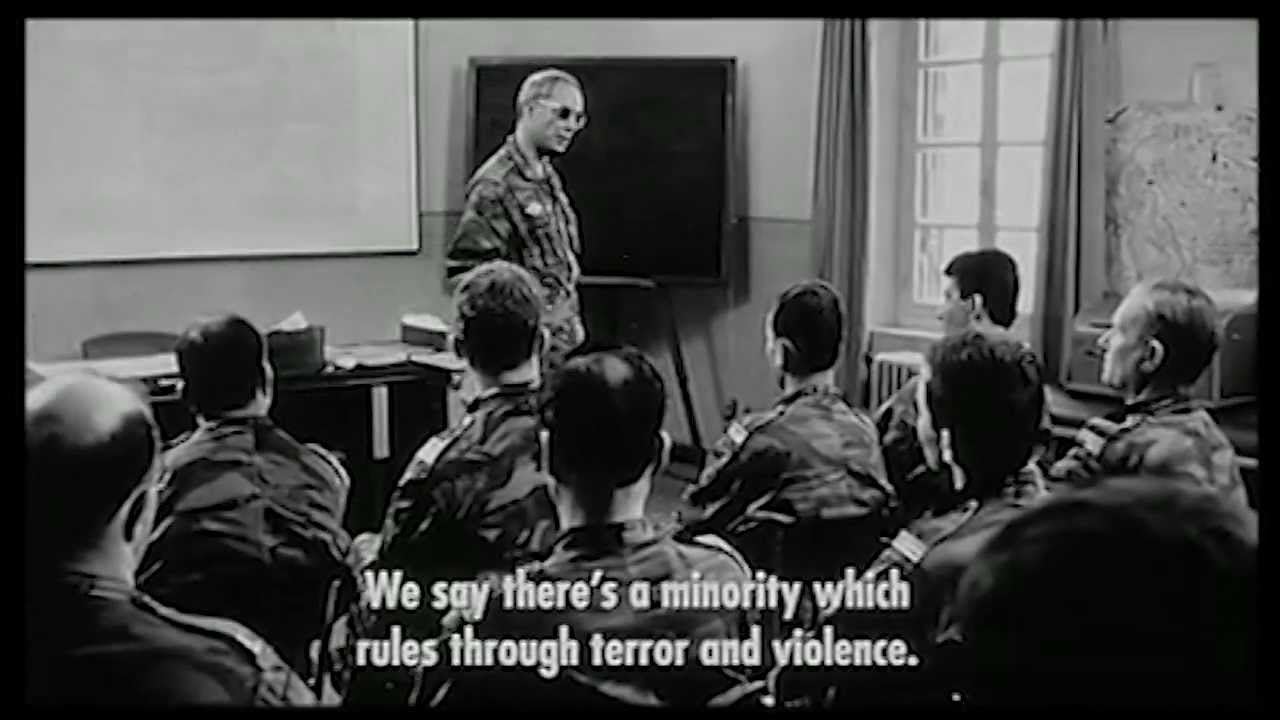 The tactics of the FLN guerrilla insurgency and the French counter insurgency, and the uglier incidents of the war are depicted. Both colonizer and colonized commit atrocities against civilians. The FLN commandeer the Casbah via summary execution of Algerian criminals and suspected French collaborators; they commit terrorism, including actions like the real-life Milk Bar Café bombing, to harass Europeans. The security forces resort to killings and indiscriminate violence against the opposition. French paratroops are depicted as routinely using torture, intimidation, and murder.

Pontecorvo and Solinas created several protagonists in their screenplay who are based on historical war figures. The story begins and ends from the perspective of Ali la Pointe (Brahim Haggiag), a petty criminal who is politically radicalized while in prison. He is recruited by FLN commander El-hadi Jafar, played by Saadi Yacef, who was a veteran FLN commander. 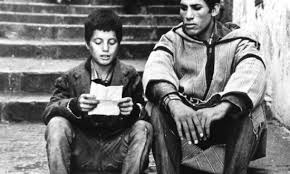 Lieutenant-Colonel Mathieu, the paratroop commander, is the principal French character. Other characters are the boy Petit Omar, a street urchin who is an FLN messenger; Larbi Ben M’hidi, a top FLN leader who provides the political rationale for the insurgency; and Djamila, Zohra, and Hassiba, three FLN women urban guerrillas who carry out a terrorist attack. The Battle of Algiers also features thousands of Algerian extras. Pontecorvo intended to have them portray the “Casbah-as-chorus”, communicating with chanting, wailing, and physical effect. 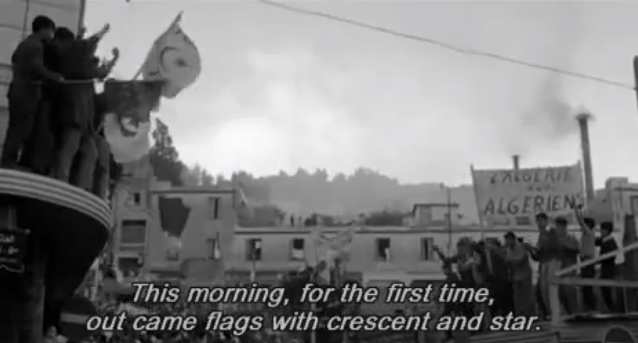 Pontecorvo chose to cast non-professional Algerians. He chose people whom he met, picking them mainly on appearance and emotional effect (as a result, many of their lines were dubbed). The sole professional actor of the movie was Jean Martin, who played Colonel Mathieu; Martin was a French actor who had worked primarily in theatre. Pontecorvo wanted a professional actor, but one who would not be familiar to most audiences, as this could have interfered with the movie’s intended realism. 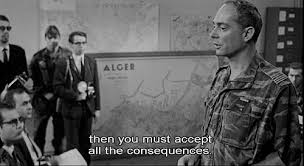 Martin had been dismissed several years earlier from the Théâtre National Populaire for signing the manifesto of the 121 against the Algerian War. Martin was a veteran; he had served in a paratroop regiment during the Indochina War and he had taken part in the French Resistance. His portrayal had autobiographical depth. According to an interview with screenwriter Franco Solinas, the working relationship between Martin and Pontecorvo was not always easy. Unsure whether Martin’s professional acting style would contrast too much with the non-professionals, Pontecorvo argued about Martin’s acting choices. Saadi Yacef, who plays El-Hadi Jaffar, and Samia Kerbash, who plays Fathia, were both members of the FLN and Pontecorvo is said to have been greatly inspired by their accounts. The actors credited are: