Film artist Ousmane Sembene, has been a great influence for me as a fellow Senegalese who hopes to someday create magic in the film industry.With his trademark dark glasses and pipe,which somehow reminds me of director John Ford’s look, Sembene was a force to be reckoned with in African Cinema.

He was born in Ziguinchor, Casamance a region in Senegal on January 1st, 1923. He completely changed the game in Africa by revolutionizing the industry with his thought provoking assessments of society.He moved to France during the 1940s where he worked as a docker and start dabbling with writing. Le Docker Noire (1956) or in English Black Docker is Sembene’s first book which was influenced by correcting the  misconceptions Europeans held towards Africans. Also  African literature writers in Europe were nonexistent in general during that time.This book was followed by O Pays Mon Beau Peuple (1957). Borom Sarret (1963) is his first film and is about 20 minutes long. I’ve learned that it was the first film made by a black African in Africa (Quite an achievement indeed). It was highly praised by critics  and won prizes at film festivals. He narrated, directed and wrote this story about issue of poverty in Africa particularly Senegal even after independence.The film commences with the day in the life of a cart driver whose name lends the title of the picture.You learn how the community still are affected or perhaps even blind to the remnants of their previous controlled society. Borom Sarret doesn’t have a great job yet he carries his position as a badge of honor.I won’t delve too much on the synopsis since it’s a short film but view the film and you’ll see how it speaks volumes on the state of society during that time.

L’Empire Sonhrai (1963) which translates to The Sonhrai Empire is the director’s first documentary film that was approximately 20 mins.It examines the history of the Sonhrai or Songhay empire which was located in western Africa since the 11th century.It became one of the biggest Islamic empires in history. The picture was produced by the government of Mali as well. Manuscripts of mathematics and astronomy found in Timbuktu. 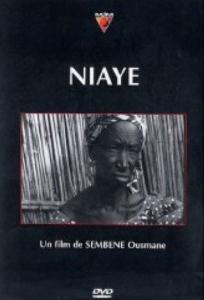 Sembene’s following film after his previous two, Niaye (1964) was also well received and was given a prize at the Locarno Film Festival in Switzerland.It’s another black and white short film that runs little bit under half an hour.This story is as taboo as they come dealing with the pregnancy of a young girl  and how her village responds to it. It’s quite shocking, somber and plain depressing when the viewer faces the truth of how she came to be with child.

Author John Cheever proclaimed that “The need to write comes from the need to make sense of one’s life and discover one’s usefulness.” and Sembene exemplified that truth.I deem him an observer of African society’s place in the rest of the world and was proficient in presenting those stories.

He managed to form his own studio while in the mean time balancing directing and writing his films. As a means to fund his other movies, the director made documentaries. Along the way, while working on his earlier films, he for the most part  created a plan to eliminate distributional problems.The locations he hoped large amounts of people would view his films were scarce since there was a lack of theaters. To remedy that hindrance, Sembene initiated film tours in order to journey to villages in Senegal and show his pictures. FEPACI(Fepaci Fédération Panafricaine Des Cinéastes) or (The Federation of African Filmmakers) applauded the move which prompted other African film directors to follow that path.

The writer in him was proactive in creating an African cinematic language as a result of the tours. This approach was evident in Xala(1974) and Le Mandat (1968). I’ve noticed that his movies carry a filmic vocabulary that faced the issues of many African languages and dialects. Sembene combines images, pictures, and gestures as a necessary part of the story.By using this approach,he was able to effectively communicate the plot of the movie despite having the actors speak in Wolof, one the main languages in Senegal. In  Xala (1968), a series of symbols in conjunction with each character was used to contribute to the narrative and make it easier to understand between different languages.The language the director has adopted became the replica for FEPACI film directors. After finishing this landmark film, Xala, he tackled historical events in Senegal.

Ceddo (1977) is magnificent film that inquires about the religious wars in Africa during the 17th and 18th centuries. Sembene’s next project explores the conditions that preceded the massacre of Senegalese infantrymen,veterans who had served in the french army in World War II, by the French army in Thiaroye. Camp de Thiaroye (1987) received the Jury Special Award at the Venice Film Festival in 1989. Many have dubbed this film, one the filmmaker’s most ambitious pursuits. Guelwaar(1992) addresses the problem of food aid diversion by the government in postcolonial Africa, specifically his homeland of Senegal. He completed the film in 1994, but the Senegalese government prevented the director from realizing and showing the film in Senegal.Unfortunately, the picture has had very little distribution and screening in other parts of the world. The positioning of women in society in postcolonial Senegal is at the core of Faat Kiné. It presents the life of Senegalese middle-class in present-day Dakar in all its forms; whether it’s poverty, tradition and wealth. Female genital mutilation, female empowerment,basic human rights is the range of topics that is dealt in Ousmane Sembene’s last film, Moolaade (2004).What is traditionally viewed as ritual for purification, dissenting voices are loud and clear that it is grotesque of the highest order.

The superb and beloved film legend, died in his home in Dakar on June 9, 2007 at the age of 84. Director Martin Scorsese,a known cinephile acknowledged the contributions of African cinema when he received the Cecil B. Demille Award at the 2010 Golden Globes: “None of us would be here without the people who come before us. Whether it is De Mille, Hitchcock or the Senegalese filmmaker Ousmane Sembene, Satyajit Ray …We are all walking in their footsteps all of us …”

Couldn’t have said it better.