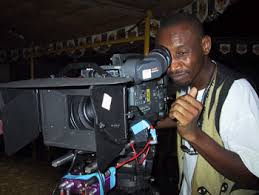 Dani Kouyate (b. 1961 in Bobodioulasso) is a  Burkinabè filmmaker and son of the actor and griot Sotigui Kouyaté. Studied filmmaking at the University of Paris VIII and at the Sorbonne.In addition to his work in television, His first two features are major works: imaginative evocations of the African past, drawing on oral story-telling techniques. He made a 50-minute documentary on the African historian Joseph Ki-Zerbo in 2005.

Dani Kouyate’s film, Keita: The Heritage of the Griot, illustrates one version of the tensions of community-building hybridity. Kouyate himself comes from a Mande praisesinger family in Burkina Faso, and his film portrays the importance of the praisesinging tradition in educating the modern children who will build the region and the nation. Kouyate’s father plays Djeliba, the praisesinger come from the countryside to retell the epic of Sunjata to a new generation of children in the city. The children are portrayed as Westernized and schooled only in “modern” knowledge. They learn to love the Sunjata story despite an unresponsive teacher and ambivalent parents.

The Sunjata tale adds depth and purpose to their school education and stimulates a new commitment to an African future. The Sunjata story itself tells them— through young Sunjata’s own struggle to overcome his inability to walk, and then to win a kingdom— how to blend a mixed heritage of learning and spiritual power to create personal effectiveness, a great polity, and a lasting culture. The layering is striking here: the director is a jali making a film in which the lead actor is a jali who plays a jali telling the story of Sunjata to a modern audience, both on film and in the movie theater. In the film and in the theater, the story performs jaliya to guide an audience through the political dilemmas of the contemporary world. Through the jali— in their multiple guises as film director, actor, and bard— Sunjata still speaks to the world, offering a legacy to guide the future.