You may not be familiar with African Film magazine but it has been one of many photo comics that has bombarded English-speaking West Africa in the early post-colonial era. Catering to the new urban youth, the series featured the  amusing and mythical persona of Lance Spearman, a.k.a. “The Spear,” a black James Bond-like crime fighter as the central character.The character was portrayed by Jore Mkwanazi.The comic magazine was published by Drum in Nigeria and later also Kenya and Ghana in the early 60s.Though the series was criticized for its sometimes stereotyped portrayals of blackness and masculinity, it nonetheless had a lasting influence in fostering postcolonial pride and identity.Its combination of extreme (often cartoon-like) violence, with pastiches of early Hollywood melodramas, dashes of romance and glamour – via the street and touches of black nationalism preceded the Blaxploitation explosion in American cinemas in the 70s and its use of inventive DIY tactics to overcome budget constraints (Spearman’s trademark Corvette Stingray was often a picture of a dinky-toy) had a lasting influence on the Nollywood industry. 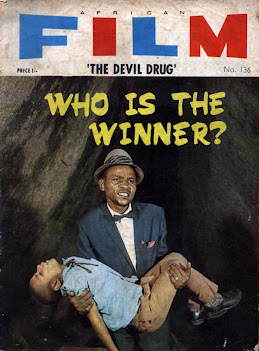 In contrast to the racist stereotype of the uncivilized, uneducated, spear-carrying cannibal, or the eroticised “noble savage” that characterised the depictions of Africans in most Western comic books from the time, Spearman was sharp, stylish and sophisticated.

Combining re-appropriated Western references with a distinctly African cultural identity, he reflected a newly defined black Atlantic modernity. Here was a comic book hero that presented a potential critique of colonialism, as well as a significant variation in how the genre classically figured normality and otherness.